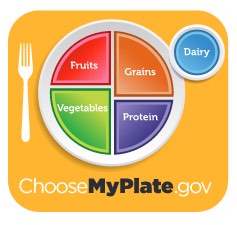 We’ve talked a couple of times over the last few months about changes in the USDA dietary guidelines. These changes, based on the newest research in the area of nutrition, have been adopted into the 2015 edition of the dietary guidelines. One highlight to the new guidelines is a shift away from the food pyramid that has been a long-time feature of the US dialog about healthy eating. The pyramid has been replaces by a plate, making it easier to visualize your portions.

The DGAC (Dietary Guidelines Advisory Committee) that assembled the report is made up of nationally recognized nutrition and medical researchers, academics, and practitioners. Their recommendations are informed by evidence-based research in the fields of nutrition and food safety. For the first time, the report includes a sustainability statement which includes the following in its opening statement:

“The availability and acceptability of healthy and sustainable food choices will be necessary to attain food security for the U.S. population over time. Integral to this issue is how dietary guidance and individual food choices influence the nation’s capacity to meet the nutritional needs of the U.S. population. Food sustainability and food safety are also interrelated in generating a secure food supply.”

Sustainable diets are defined as a pattern of eating that promotes health and well-being, provides food security for the present population and sustains human and natural resources for future generations. Recognizing the significant impact of food production on the environment, the report emphases less resource-intensive foods that have a lower environmental impact in their production and harvesting.  Diets that include a higher amount of plant-based foods, such as vegetables, fruit, legumes, nuts and seeds, are demonstrably more sustainable. An example of this pattern of eating is the Healthy Mediterranean Style diet, with its emphasis on leafy vegetables and seafood. The global production of food impacts every facet of the ecosphere, leading to deforestation, the majority of fresh water use, and  an estimated 30% of human-generated greenhouse gas emissions.

Influencing what consumers purchase is the biggest challenge facing the implementation of sustainable diets; efforts are taking place globally to raise awareness of the issue of sustainable food production. The UK, for instance, has developed a twenty-year Strategic Plan with carefully outlined goals. They have also publicized their new food plan, Eatwell Plate, through their site, much as the USA has done with MyPlate. Both efforts exhibit big changes in proportions of food groups, and a reorganization of foods. Most of the changes parallel each other with one exception. Lipids appear on the plate in the UK version, while the USA version relegates them to a footnote.

But the US media hasn’t picked up on these changes like they have in the UK, which has popularized their healthy choice diet through shows like Gordon Ramsey’s The f Word. Individual and population-level adoption of more sustainable diets can change consumer demand away from more resource-intensive foods to foods that have a lower environmental impact. The summary of the Committee’s findings is really quite straightforward.

“The major findings regarding sustainable diets were that a diet higher in plant-based foods, such as vegetables, fruits, whole grains, legumes, nuts, and seeds, and lower in calories and animal based foods is more health promoting and is associated with less environmental impact than is the current U.S. diet.” (DGAC 2015: Executive Summary)

Hand-in-hand with the environmental impact of food production on agricultural sustainability is consumer accessibility of the foods that make up a healthy diet. Food security exists when all people now, and in the future, have access to sufficient, safe, and nutritious food to maintain a healthy and active life. The USDA maintains a library of papers at this link that catalog their findings on food security and its impact on a national and global level.

Food is an economically sensitive issue. With some of our population living in food deserts, availability of healthy choices is already a challenge.  Consideration of the efforts that will need to be made by consumers to comply with these new initiatives, and become affordable for the majority of the population, will need to be made.